The Story of Johnny Manziel by Ken David Stewart Part One

I have always been one to root for the underdog.  So far, ex NFL player, Johnny Manziel has had many career and personal struggles.

Johnny was the youngest player ever to win the Heisman Trophy.  He was a star college quarterback with Texas A and M.

Johnny played fifty NFL games and had eight starts.  He had difficulty translating his college football skills to the NFL.

Johnny Manziel was forced to leave the Cleveland Browns due to problems with performance consistency and some unfortunate off field incidents.

The Canadian Football League fans appeared to welcome Manziel with open arms.  He played in a few promising outings with  Montréal.  I don’t think that the CFL gave Manziel adequate time to adjust to the Canadian brand of football.  CFL football is a much different game from the NFL.  The footballs are larger in Canada, the field is longer and wider and the quarterbacks only have three downs to make a first down in the CFL.

It is this writer’s opinion, the CFL should have allowed the former Heisman Trophy winner more time to learn the Canadian football game.

It is still somewhat of a mystery why Johnny Manziel was banned from playing in the CFL.  This was a very unusual situation, as Manziel does not appear to have been fired by the Montréal Alouettes.  This decision was made by the CFL itself.  Johnny was not allowed to be picked up by any other team in the CFL.  The CFL said that Manziel was released as a consequence of breaking some of the conditions of his contract.  They would not specify what these conditions are.  This was a shame as I think that Manziel would eventually have become a good quarterback in the Canadian league.

Soon after leaving the CFL was signed by a new football league called the Alliance of American Football (AAF).  Johnny was only allowed to play for the Memphis Express for two weeks before the AAF folded.

Manziel was once again a free agent. The only possible way that he could play pro football again is if the XFL would show interest in him and offer him a contract.  As of this writing, I’m unaware that any of the XFL  teams have been willing to sign him. 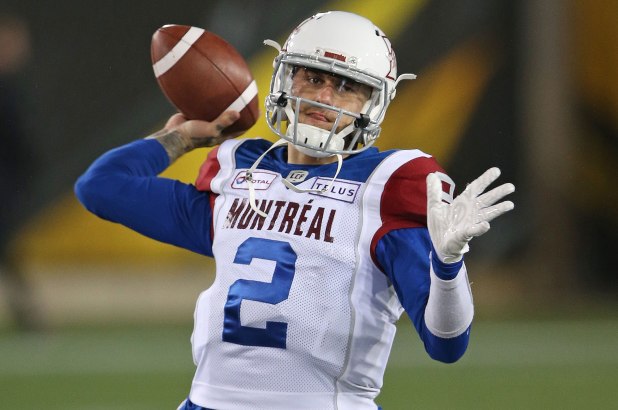