Alligators in the Sewers A Novel by Ken David Stewart

Russ Bridges was enjoying a long, restful nap on his new black leather couch. He was startled out of a deep sleep when he heard a loud pounding on his front door. Russ had just turned sixty-six was enjoying his first year of retirement as the former superintendent of sewers for the city of New York. It was 2:05 PM on June 11, 2017. He had been reading the novel It by Stephen King. It was not unusual for Russ to fall asleep on his couch while reading in the mid afternoon. Stephen King was Ross’s favorite author and It was his favorite novel by the most popular horror writer of the century. This was usually how people defined Stephen King as a writer, but the author hated this limited, restrictive view of his writing.

As the pounding on his door became louder, Russ managed to lift his substantial bulk off the couch. When Ross opened his front door he saw Sean Webb, the new superintendent of sewers. Sean took over Russ’s position when he retired. Sean looked very anxious when Ross opened the door for him. “Can I smoke in your house, Russ? I’m all stressed out and I need to talk to you.”

“Sure. Come on in Sean. Yeah, you can smoke in my house. I gave up smoking about ten years ago. Now I just vape like the young people do. You really look agitated. What’s up?”

“Thanks for seeing me on such short notice or rather no notice,” Sean said as his trembling hand reached into the front pocket of his shirt for his pack of Marlborough cigarettes.

“I got a serious problem at work and I really need your advice, Russ. Have you ever heard or seen anything to do with alligators in the New York sewer system?”

“Yeah, I know quite a bit about the problem, but I haven’t told anybody about it. Before I retired from your job, I had to sign a bunch of papers swearing me to secrecy concerning that topic,” Russ answered.

“Why don’t you find a place to park yourself in my living room, Sean?”

Sean was feeling faint so he was relieved to have a place to steady himself. He spotted a bright orange Lazy Boy chair in Russ’s living room. It was the first time that Sean had been in Russ’s house and he found it odd that Russ would have been orange easy chair and wondered where Russ got it.

“Where did you find an orange easy chair, Russ?

“On eBay. It’s a rare color for an easy chair but don’t ask me how much I paid for it. Would you like some coffee to go with your cigarette?”

Russ reached over to his fireplace mantel and took a very weird looking ashtray from the top of it. The ashtray was a beige color in the shape of an alligator. Russ placed it on the glass coffee table in front of Sean’s chair.

“You are starting to freak me out Russ. This ashtray looks a lot like a white albino alligator. This is like a prophetic symbol of why I’m here to meet with you,” Sean said.

“ Some coffee creamer and Sugar Twin would be great if you have it.”

“You’re in luck. That’s exactly what I put in my coffee. My favorite flavor is hazelnut. What’s yours?”

Sean managed a nervous laugh. “What a coincidence. That’s my favorite too.”

“My wife gets on my back quite a bit about using Sugar Twin. Ruth’s a nurse and she never fails to tell me that artificial sweeteners cause cancer. I told her that I don’t worry about that because I want to die before she does. I’m being serious, too. I don’t know how I would manage to get along without my wife.”

Russ hated the aging process. He didn’t like the fact that he could not do all the things that he was able to do at age forty. Russ had been somewhat of a high-energy freak of nature when he was younger. He was still trying to make a difficult adjustment to his new life as a senior citizen. This was not an easy transition for him. Since his retirement started he had put on about twenty very unnecessary pounds that he did not need that were causing him to slow down in his daily life activities. Russ found that with each passing year he seemed to either reduce or had to eliminate one of the activities that he had enjoyed doing the year before. Life wasn’t fair. A man of Russ’s intellect and drive could not understand or accept the inevitable fact that he was being forced to slow down in his senior years.

Russ wasn’t very happy with his life now that he was retired. It bothered him that he no longer knew how much time he had to live. His father had passed away at age forty-two after suffering a massive heart attack. This really shook Russ up, and he started thinking about his own longevity.

Russ had a lot of regrets even when he was in his prime. He had a poor self-image. He knew that he had excelled in his work for the city of New York, but felt that in most areas of his life he had been a failure.

Sean’s hand was still shaking as he took a long way drag from his Marlboro cigarette. “I’d sure like to hear any information you have, Russ. I feel like I’m going crazy. Sure, I heard some stories about alligators in our sewer system, but I thought it was just an urban legend. So did most of my coworkers until they started claiming they actually saw alligators while they were performing their sewer maintenance duties.At first, I didn’t believe them when a couple of my staff told me about their encounters with these reptiles. I just figured that seeing that I was their new supervisor they decided to tell me these stories as sort of an initiation prank.” 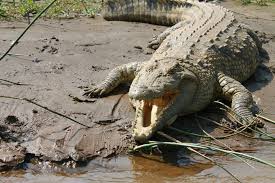